The Sims 4 Mod Manager is a program designed to make management of mods easier.

• Drag and drop (supports more than one drop)
• Auto-installs mods from their archives (Zip, RAR, or 7Zip). See “Adding Mods” below.
• Does not make use of the Resource.cfg – Mods are backed up to a folder, and are copied to the “Mods” folder when enabled.
• Enable multiple mods at once
• Disable multiple mods at once
• Shows mod type – “Package” if it is a “.package” file, and “Script” if it is a “.zip” file. Also shows icons for both types.
• Supports sub-folder categorization (only supports 1 level) 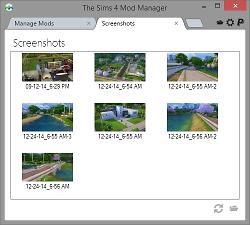 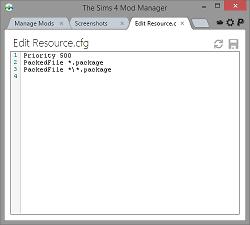 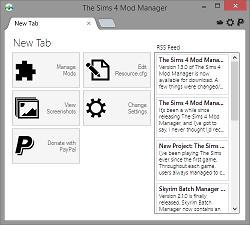 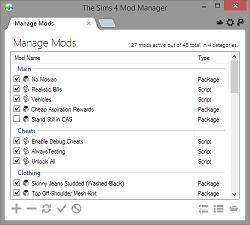 • Added support for 7zip archives.
• Changed to use 7zip libraries for extraction of all supported archive formats.
• Download now comes in the form of an installer.
• Any zip archives contained within an archive will be extracted and discerned as a script mod.
• Small internal chages/optimizations.

With previous versions, installing package mods required you to
first extract the “.package” files somewhere, and then add them with the manager.
In the current version of TS4MM, that step is removed. If the package mod or mods
that you have downloaded are contained in a “.zip”, “.rar”, or “.7z” archive,
you can simply drag them in to the manager, or add them with the button,
and the manager will automatically extract any “.package” files in the archive into your Mods folder.

You do not have to worry about whether or not the mod you download is a script mod.
The manager will discern the difference by looking at the contents of the archive,
and if it is a script mod, it will copy it to your Mods folder.

Applies only to the mod manager tab.

Unzip and extract anywhere, then double-click “TS4MM_<version>-Setup.exe” and follow the steps for installation.
After it’s installed, simply double-click the icon on your desktop named “TS4 Mod Manager”.

Requires .NET Framework 4 or higher.
Additional Credits:
Thrahistan – For creating the first mod manager, and the inspiration for this one.