Will Boyd House from Far Cry 5 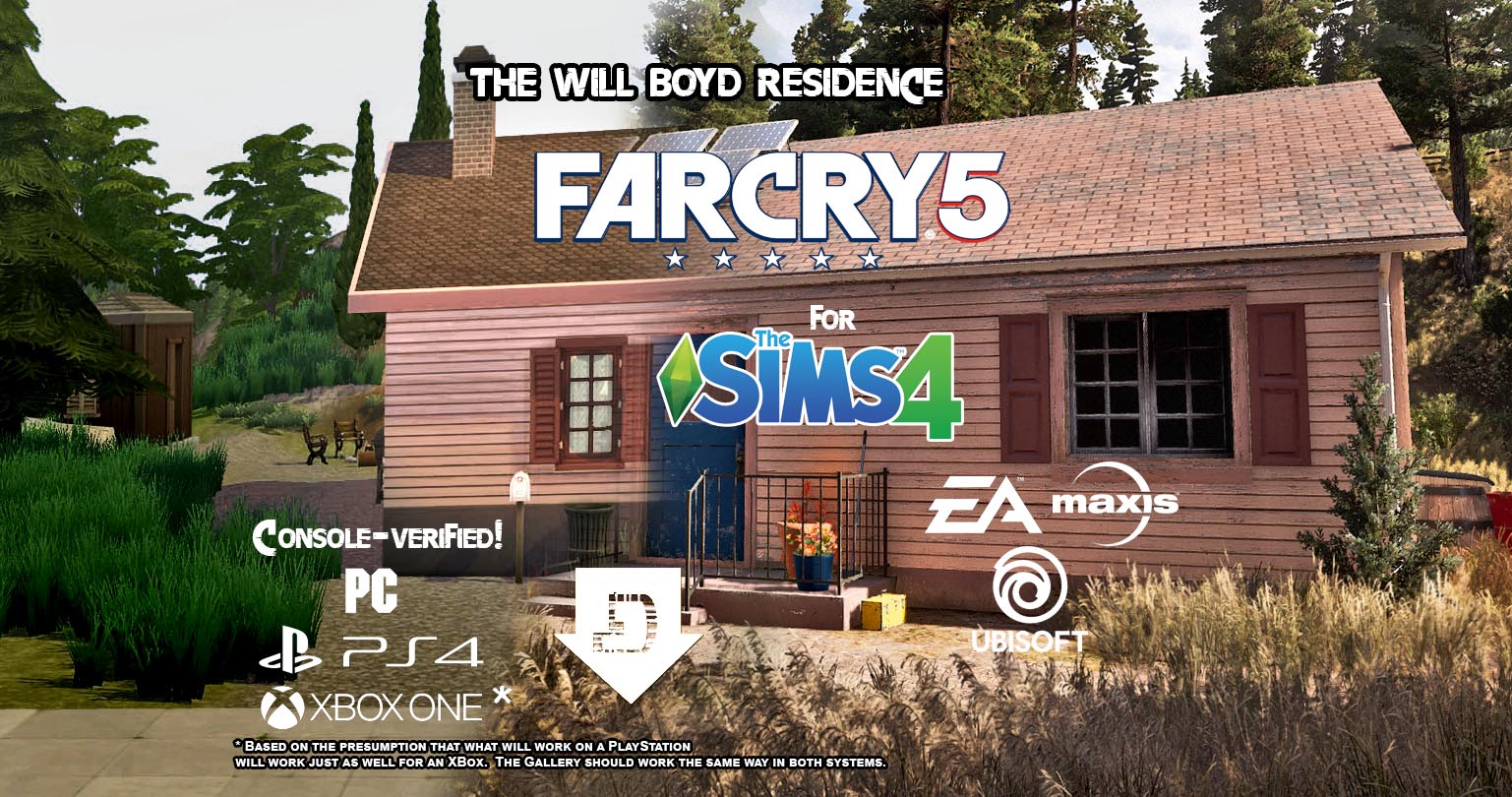 This lot was first tested and created using only a PS4, with this PC edition upload here being made second.

For PS4 / Xbox One players

Check the Gallery under either “DozerfleetProd” (my PC handler) or “BulldozerIvan” (my PS4 handler.) Or search for #FarCry5.

Keep reading, to learn how to download from here. Though, it should be available in the Gallery too.

Who is Will Boyd?

Note: This section is written for those who aren’t already avid fans of the game, and don’t know the mythos well.

Boyd is one of the two protagonists in the semi-canonical Far Cry 5 prequel Far Cry: Absolution. His sense of loyalty is torn, as he initially joins the Project at Eden’s Gate cult; yet can’t bear to hurt his friend Mary May Fairgrave – who has joined the Resistance.

Both sides have become aware that nuclear war has broken out. That both the US and North Korea are equally to blame. The resistance believes it’s their right to prepare for potential nuclear fallout on their own terms. Eden’s Gate believes they have the one and only right way to prepare. Due to various complications of the war, Hope County in Montana becomes isolated. The National Guard isn’t coming, leaving it up to the locals to fend for themselves. So rival factions form.

However, tensions rise when the Seed family, in charge of Eden’s Gate, become increasingly warlike themselves. When they decide that the only way to eliminate certain thorns in their sides, is to force the entire county into serving them. The Seeds are very charismatic, and very manipulative, in control of a powerful neurotoxin called “Bliss” that allows them to alter the perceptions of victims and make them believe almost anything.

Before joining Eden’s Gate, Boyd developed his own prepper bunker inside a wooden shack in his back yard. He became very talented at using a well and sub-pump system, as well as utilizing solar power, to ensure he always had enough power and water to take care of his most basic needs. He believed, however, that working for John Seed would ensure him a place in one of the Seeds’ official bunkers – in case his own proved inadequate.

However, he soon saw how warped, sadistic, and perverted John Seed could be. He began to question if he’d joined the right side or not.

Inside the FC5 PS4 game 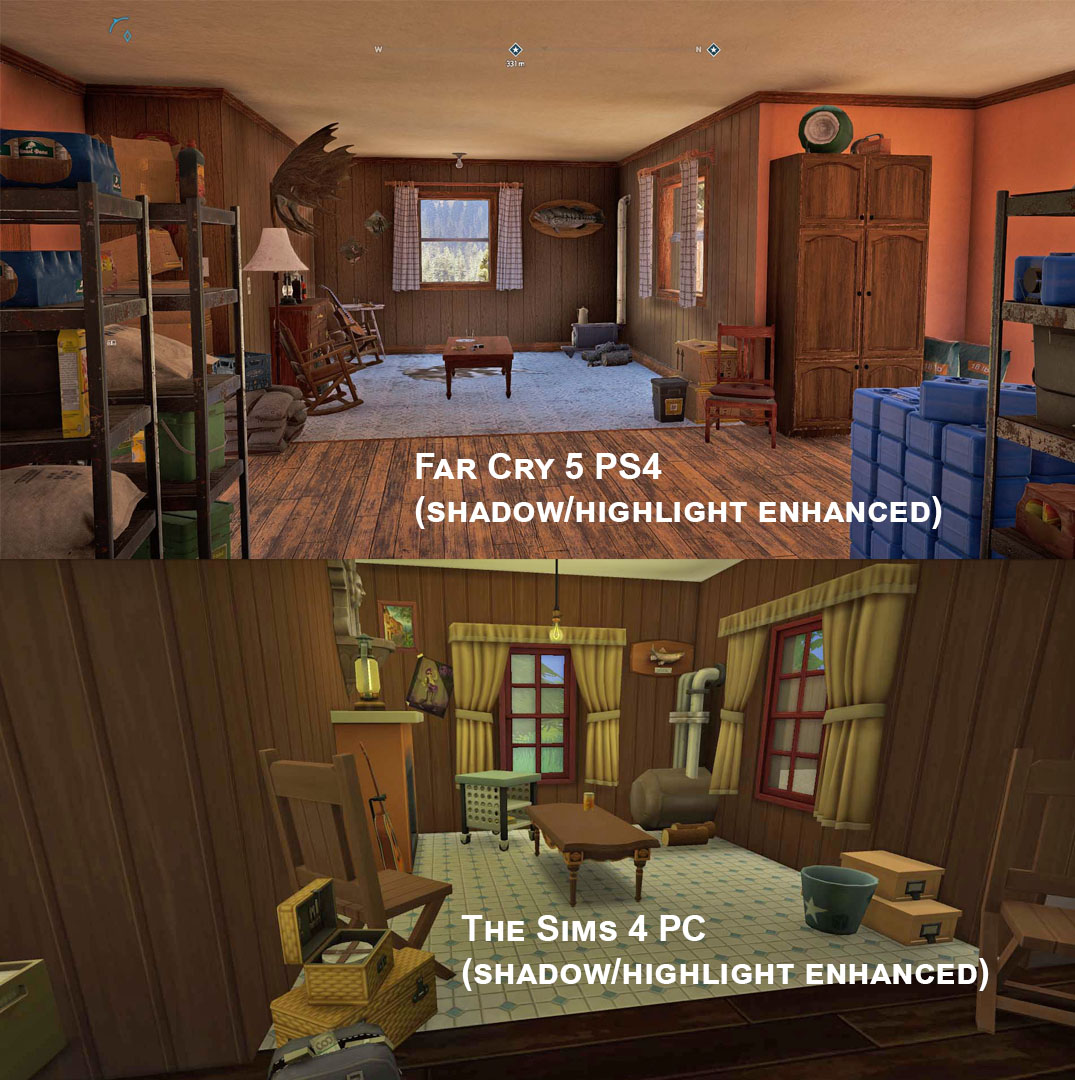 In the main Far Cry 5 game, you can visit Boyd’s house in the Holland Valley region. It’s the hidden location of a Vietnam comic. It’s located near the Dodd Residence and Strickland Farm. Boyd himself doesn’t appear in the game proper, though he is mentioned. He also doesn’t appear in the Asylum Films short Inside Eden’s Gate, an elaborately well-done live-action prequel film to the game.

Side note: I’ve seen the trailer for Inside Eden’s Gate, and Greg Byrk is a dead ringer for Joseph Seed. Even more terrifying in live-action than in the game!

Suffice to say, it wasn’t possible to make this lot for Sims 4 a 100% accurate translation. So whichever items I was able to create approximations or substitutions for, I made. 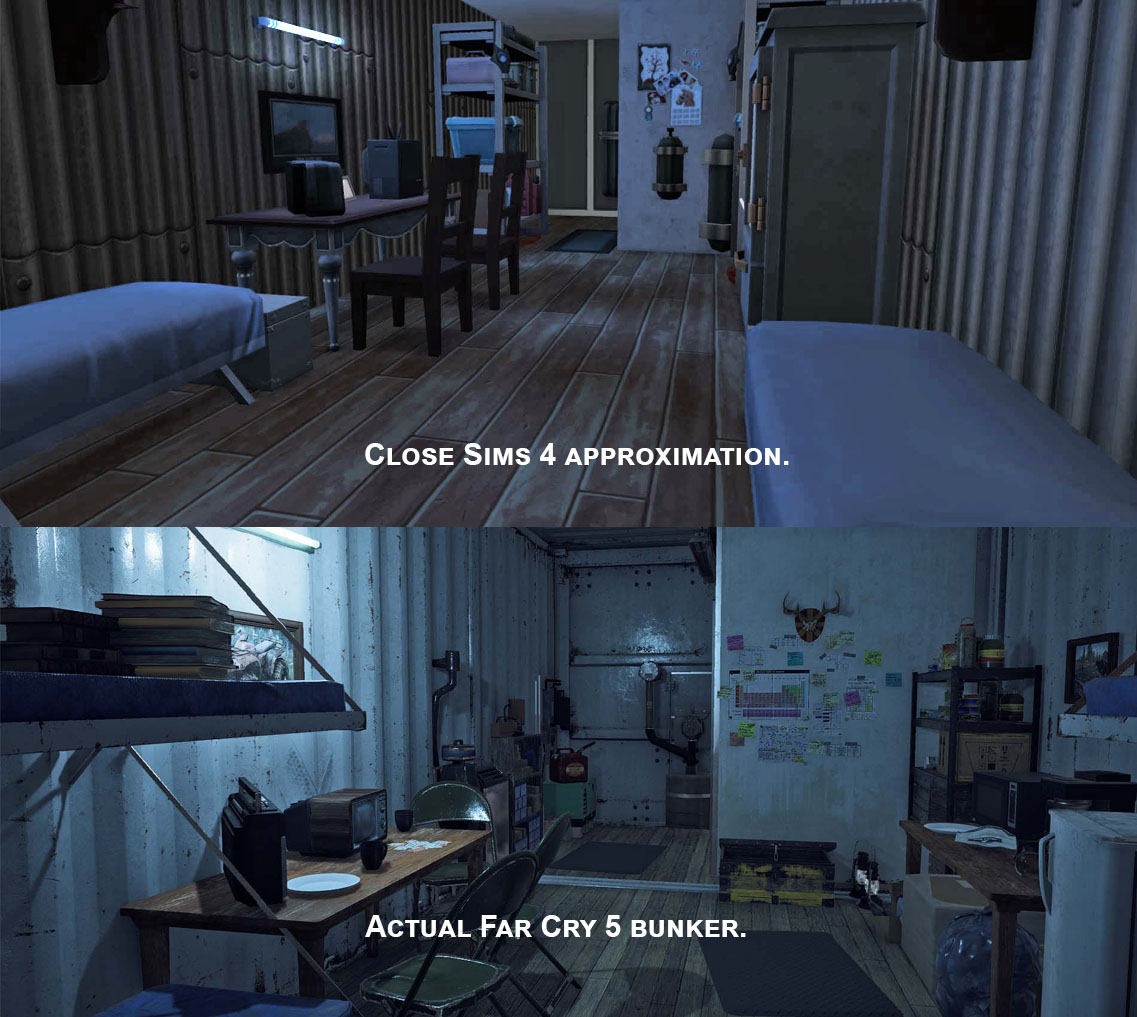 Note: The Spider-Man joke image was PC-generated, obviously. It’s also part of a running gag that began in December of 2018, with various Into the Spiderverse memes. I jumped on board with that with various TS4 mod testing for putting different Spider-Men in Sims 4, and then ran that to make a parody dubbed A Centipede Lost in the Spiderverse, where Ciem gets forcibly inserted into the Miles Morales origin story (but fails to change it in any truly significant way.)

The joke is also part of a gag with how one of the Deputy avatar customization options looks a little bit like Yuri Watanabe / Wraith from Spider-Man PS4, leading to a joke that she left the Manhattan map (which Peter isn’t allowed to do) and took up shelter after the Silver Linings DLC by becoming the Junior Deputy out in Hope County, Montana. How Yuri became mute, is never explained. But the running gag is that whenever Spider-Man appears in a different video game, he says something to the effect of: “So this is why I never leave Manhattan!”

To better match the Far Cry version, the following changes may be made to your lot. I’ve included a picture of one as an example.

Additional Credits:
Special thanks to Ubisoft, for inspiring this amazing game for me to re-create.