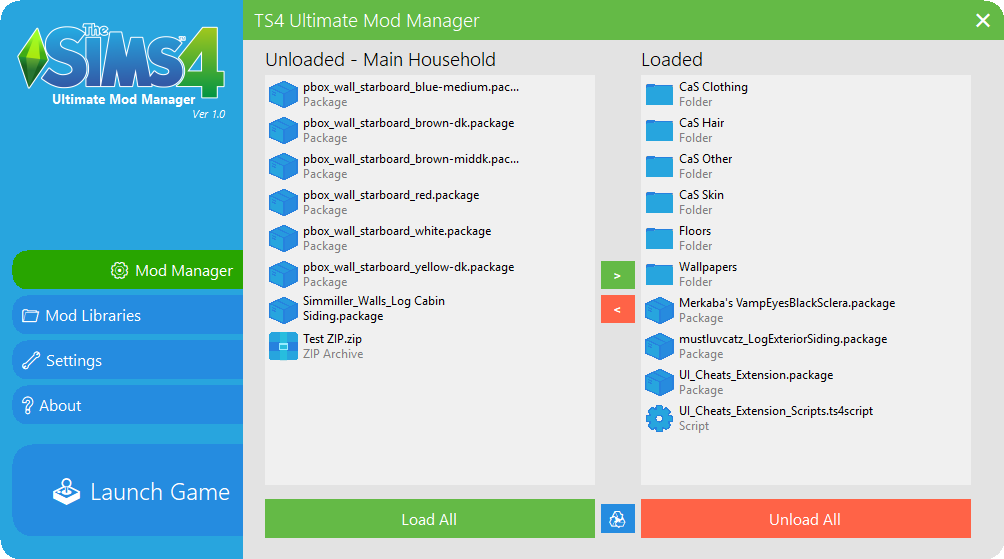 The Sims 4 Ultimate Mod Manager is a fully-featured application to manage mods and custom content for the Sims 4.

Thanks so much for checking out my application. I originally made this for personal use, but after developing it to its current state, I thought it was good enough to share with the rest of the community!
Please note that the application is still under development. You may encounter some bugs or things that just aren’t quite right. If you do, please let me know and I will do my best to issue a fix ASAP!

Subfolder support! You are no longer limited to managing mods directly in the root of the mods folder/selected library. Double clicking a subfolder will now load its contents into the list, allowing you to move mods to/from there instead.

Log Reader: You can now view Last Exceptions and other log files right in the application. Access this in the settings menu.
Bugfix (kinda): The refresh button actually looks like a refresh button now!
Meta: Fixed some typos in this very changelog, not that you noticed them… did you?

I had to make some reasonably large changes to the code to get subfolder support working correctly, so as always, it’s possible that some bugs have slipped through the cracks. Again, let me know if you encounter anything out of the ordinary and I’ll issue a fix. Also, this is the first version that the app’s automatic update feature should have detected! Let me know if you got the popup!

VERSION 1.1 (26/06/19) – Calling Home
AUTOMATIC UPDATES!
An update to make updating easier huh? This is just a small update but it should hopefully help keep everyone on the latest version.

Automatic updates! The application will now tell you on launch if there is a new version available. This can be turned off in the settings.
Bugfix: Clicking load all will no longer crash the application when there is an identically named file already loaded (and vice versa, of course).
Bugfix: Window titles have proper names now.

Larger updates are coming soon. I’m currently working on an embedded file browser and set up the groundwork for localisation down the line. A reader for log files is also being worked on. Hopefully, the application will let you know when the next version is ready to download! 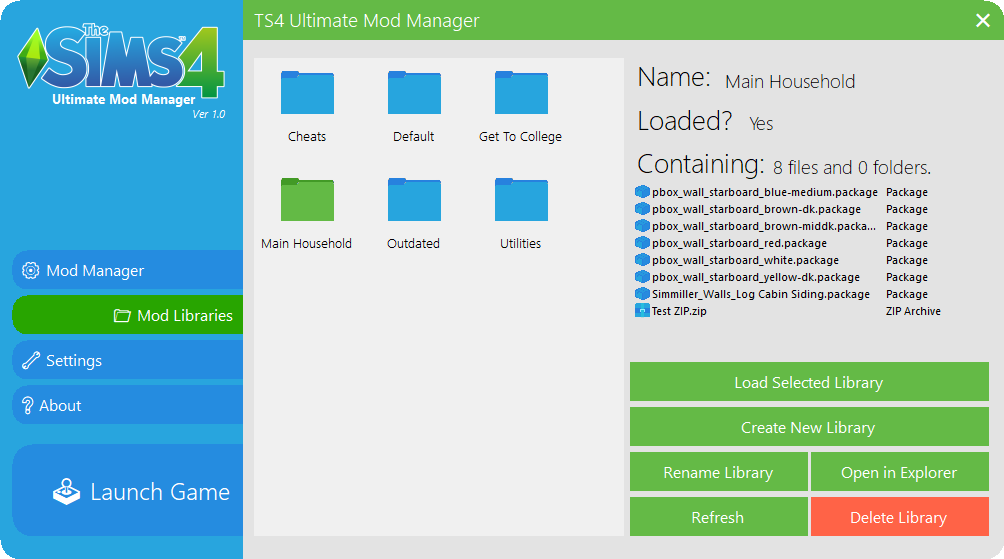 How to use:
Upon starting the application, it will drop a folder in your Documents folder called ‘TS4Libraries’ (this will be configurable in the future).
Any subfolder in that folder will be treated as a library and display in the ‘Libraries’ section of the application.
When you select a library, all of the CC in the library will populate the ‘Unloaded’ list where you can then load it into your mods folder.
Unloading a mod will move it back into the library that is currently selected.